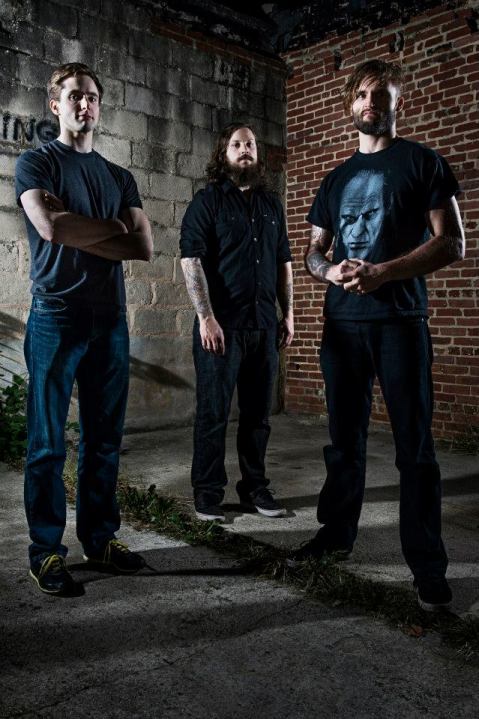 Winnipeg, Manitoba’s long running rock/hardcore trio KEN Mode are making the rounds in the states right now with Fight Amp and the occasional Today Is The Day in tow, and damn… That’s one heavy ass lineup! Forming around the turn of the millennium, KEN Mode, a self described “Dance Party Killing Machine,” play an extremely loud, noisy, brand of hardcore that’ll shred your eardrums while dimming your world view. Solid stuff!

With a new album, Entrench, coming out on Season of Mist, I got in touch with guitar/vocalist Jesse Matthewson prior to their appearance at SXSW to talk about the album, signing with Season Of Mist, and where this crazy band had their craziest show moment to date. Take note… It was in NYC, I was there, and it was frickin’ insane!

G- What’s going on and thank you very much for taking the time to speak with Live High Five today. You will be releasing your latest album, Entrench, on Season of Mist Records. How do you feel about the final product, and what was it like working with Matt Bayles in the studio?

J- Obviously, I feel the final product is our finest to date, otherwise I would be embarrassed to even release it! Being that we’ve been a band for nearing 13 1/2 years, the moment I don’t feel we’re not releasing our finest material is the moment this band ceases to exist.

Working with Matt was a truly great experience, as his work ethic and style meshed with ours very well, and I truly feel we’ve been able to create a unique and special work of aggressive art as a result.

G- Awesome… I’m sold! Can you tell us a bit about the inspiration, writing process, and length of time it took to get the new tracks to a level where you were satisfied with the end result? How would you compare Entrench to your previous work?

J- Every record we write seems to take a different approach. Entrench was largely put together in two condensed sessions, each spanning about 1.5 weeks, as our bassist Andrew lives in various spots in the US (he has moved around a bit). Despite this, I feel the material is the most varied that we’ve ever written and, as a result, I am quite satisfied. We always approach writing with an album in mind, and this one came together quite naturally.

G- Very cool. Now, let’s talk about the new label. As their roster of artists has exploded in recent months, how did the signing with Season of Mist come about, and how are they treating you over there thus far?

J- After our JUNO win, we were looking to take things to the next level, internationally speaking. Our bud and half manager (since I also act as half manager) Josh Eldridge got in touch with S.O.M. after the label owner, Michael Berbarian, had seen us on tour with Kylesa, he was into us, and the rest is history.

Gordon Conrad, who runs the US operations, also ran Escape Artist Records through the 90’s and mid 00’s, who put out our first two records. So, really, this union is kind of like our music industry experience coming full circle. Things have been going well so far, and the response to the record has been incredible.

G- It is definitely a “who you know” business… It’s great that it worked out like this for KEN Mode! Now, as an international touring band, how would you say your reception in the states compares with your performances at home in Canada and abroad, both in terms of how you play and the audience reaction?

J- Audience reaction wise, everything is a tougher sell in the US as there is just so much competition, and Americans are statistically less inclined to accept international bands. We’ve done fairly well in Canada for quite a few years, and Europeans in general tend to be much more into checking out new music without having to be marketed to, to the extent that North American crowds tend to require. The US is warming to us…especially since we have an American bassist.

G- Right on. Now, given recent events and as it is an issue that has been in the news lately, has KEN Mode had to deal with any altercations with fans, and what do you guys do when there is an issue with the crowd/security?

J- We pretty much never have problems in that regard. I’m not just tooting my own horn in saying that we have a fairly intense live show, but we do, and as a result, people tend to observe, and not interact. I’m okay with this.

G- Your performances definitely require a bit more attention than most, so I understand what you mean.

Speaking on your total output, do you have a favorite song you have ever written? If you could only give 1 song to someone who’d never heard of you before, to try and make a new fan, what song would you give them and why?

J- Choosing one song would be way too hard, at least for me to consider a favorite. Right now, if I’d have to choose just one song to win someone over with, I’d probably go with ‘The Terror Pulse’. It has enough of a mixture of our various influences, yet has this catchy, pulsating rhythm…I just love playing it, as it’s the most cathartic piece of music I’ve ever written.

G- Excellent call! So, you’re on tour with a few monsters in Fight Amp and Today Is The Day right now, but are there any bands or artists that you hope to share a bill with in the future? If you could pick out a feasible 3-band dream lineup to go on tour with, who would you select and why?

J- KEN Mode opens that insane tour. Bring me bodies and amazing tunes! It’d hit all the right demographics, and would be such an intense mixture of tunes. I could listen to the Melvins all day.

G- For sure! That’s an incredibly hard lineup… Let’s make that happen, powers that be!

As you have a lot of performance experience and several tours under your belt, what is the craziest or most memorable show that you have played to date? Where was it and what was it like?

J- Last fall in Brooklyn for CMJ music week with Pig Destroyer, Early Graves and Encrust. People were destroying each other. We’re not used to people moving while we play, let alone that level of insanity!

G- Glad to say I was right in front for that show, and almost proud of the fact that I had a footprint firmed imbedded in my chest for 4 days after the show. Good stuff!

Lastly, as a long running band, what advice can you give some of the young, up and coming bands everywhere who want to make it in music, on the road, and as a professional musician?

J- As a professional musician, acknowledge that you’re in for a very tough ride, and if you’re not willing to throw your life away for your art, it’s best to remain a hobby band. Network up a storm, and do your best to keep your head on the outside of your anus. It’s too easy to be a lazy asshole scumbag… Try something different.