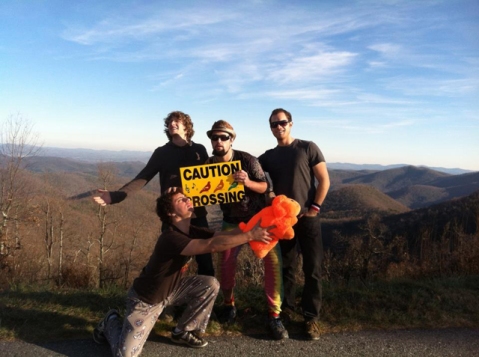 Baltimore, Maryland’s Pigeons Playing Ping Pong want one thing… To F.U.N.K. After a wild introduction to the group in Syracuse, NY, where they opened a Valentine’s Day rager with the brilliant Joe Driscoll and 315-fan fav’s Sophistafunk, the energy and musicianship of these guys was undeniable. And with a name like that, it’s kinda hard not to pay attention.

After a confusing and slightly drunken interview with the bassist in their van, I needed to get something down on these guys that I would actual remember. So, I got in touch with vocalist/guitarist Greg Ormont to talk about the band, their tunes and aspirations for 2013, and the ever-contrived but wholly necessary back story behind their name.

GO- Hey Greg, awesome hanging with you in Syracuse and happy to be chatting with you again! I’m Greg Ormont, I sing, play rhythm guitar, and I’m the only non-Marylander, originally from Port Washington, NY. Jeremy Schon plays lead guitar, sings backup and is from Pikesville, MD. Ben Carrey slaps bass, sings backup and is from Mount Washington, MD. And Dan Schwartz bangs the hell out of the drum kit, triggers samples, and is from Severna Park, MD. We all live in Baltimore, MD.

G- How long has Pigeons Playing Ping Pong been around and when did you first get started? How did the project start, and do you remember the moment that you really felt the group “click?”

GO- Jeremy and I started jamming when we met on the first day of college at the University of Maryland in Fall 2006. We quickly wrote some originals and constructed some fun cover mash-ups, and started playing shows around campus. Eventually, the four of us met and started jamming in Fall 2007. We started playing shows more regularly in 2008, and never stopped practicing.

I felt a click within the group dynamic about 2 years ago. I can’t define a specific “moment” per say, but I think the years of consistent jamming as a group helped us finally click musically. We finally developed our own unique style of funk jams, and that helped us with our direction, both musically and beyond.

G- So, I’ve gotta ask… Where the heck did the name come from? Give us the story if you would.

GO- Haha we’ve definitely gotten that question before. Pigeons Playing Ping Pong actually happened. B.F. Skinner, the behavioral psychologist, trained pigeons to peck a ball back-and-forth through operant conditioning. You can actually see a clip of this on YouTube, right above all of our videos. So back in college when we were just an acoustic duo, Jeremy and I saw the phrase in our PSYC100 textbook, and I leaned over and said “Dude, that’s the name of our band.” He laughed and said, “down.” It was a no-brainer, especially considering we weren’t even a full band yet.

GO- We all contribute pretty equally. Sometimes, one of us will come to practice with a song fleshed out completely, more or less, while other times we write songs out of our favorite improvised moments in practice. Regardless of how any song originates, we all have an equal voice in the writing process, as far as editing, revising and re-working songs go. It’s helpful to write songs as a group, because each of our creative voices are different, which causes us to push each other musically and keep our songs sounding fresh and original. Our music is a true mixture of all of our individual influences.

G- Can you give us a few examples of any bands or artists in particular that influence your style? Who do you typically like to listen to, and are there any acts you think we should know about?

GO- Phish, Talking Heads, Lotus, The Motet and The New Mastersounds influence us as a band, among many others. We also listen to a lot of great smaller acts that we’ve played with or discovered in our travels around the country. I’d recommend checking out The Shack Band out of Richmond, VA, Indigo Sun out of Chicago, Chris Joss from the U.K. and Sophistafunk out of Syracuse, for starters. We listen to these bands a lot, both for influence and pure enjoyment. Plus, Karl Denson’s Tiny Universe, Lettuce, Soulive, Thievery Corporation, Psychedelphia, Dopapod, Galactic, Frank Zappa and String Cheese Incident, the list goes on forever…

G- What should your fans, both old and new, expect of the performances when you guys hit the road? What should some of the first time listeners expect to see when you take the stage?

GO- Energy! We don’t care if we’ve played somewhere once, twice or twenty times, we’re going to do our best to fill the room with energy. We love funk, we love dance parties, we love bringing awesome people together, and it is our goal to make all of that happen at every show, whether we’re debuting in Indianapolis, IN or headlining New Year’s Eve in Baltimore. Musically, people should expect high-energy psychedelic funk, sexy bass grooves, whimsical yet potent vocals, and dirty guitar licks over drumbeats that make you boogie. BYODancing Shoes.

G- Do you currently have, or are you working on, any releases right now? When will you be heading back to the studio or on the road? Anything currently in the works?

GO- In between road trips, we’ve been hitting the studio hard, working on our second album, which will be our first release since Funk EP in 2010. I can’t tell you how excited I am about this. It’s sounds great so far, and I can’t wait to give back to the fans that have been patiently waiting for its release, and have been downloading our live shows on archive.org, soundcloud, and bandcamp in the meantime. Our fans are my main inspiration when we’re working late in the studio during our off days. They have been so supportive over the years, and are great people. I’m too pumped to hand them a copy of our new album and say “thank you.”

G- Do you have a favorite song you have ever written? Why? If you could only give 1 song to someone who’d never heard Px4 before, to make a new fan, what track would you offer them and why?

GO- I can’t put one song over another as an all-time favorite, but if I had one shot to gain a fan, I would give them “Fade Fast.” I love this song for a lot of reasons. As the singer, I often think about vocals first, and I think the vocal melody is powerful and the message is pure and universally relatable. It’s about trying your best, seizing the moment and living life to the fullest. Musically, it’s really funky and danceable, and the jam is one of my favorites that we play. It gets very spacey, ambient and peaceful, and then eventually swells into an uplifting peak that I feel to my core at every show. I also really like the way our newer songs “Kiwi” and “This is That” are developing, so I’d keep my eye on those ones too.

G- Are there any bands or artists that you hope to share a bill with in the future? If you could pick out a feasible 3-band dream bill to be a part of, who would you want to go on tour with?

GO- Haha “feasible”… I guess that rules out Phish. We would love to tour with Lotus, Lettuce and Galactic.

GO- Our New Year’s Shows in Baltimore have been insane for the past two years. Each year has been a sell-out at the 8×10, our home venue, and the energy in that room has been off the charts. Prohibition-themed in 2011 and Motown-themed in 2012, the shows were full of zany costumes, guest appearances and inspired jams. Also, I’ll never forget our Phish after-party on a boat in Atlantic City this summer. Jamming on the water for some crazies was incredible. Not to mention the time we jammed with John K of Furthur at a small festival in Maryland last summer. I have too many great memories… I’m not a complainer.

G- Lastly, what advice can you give some of the young, up and coming bands everywhere who want to make it in music, on the road, and as a professional musician?