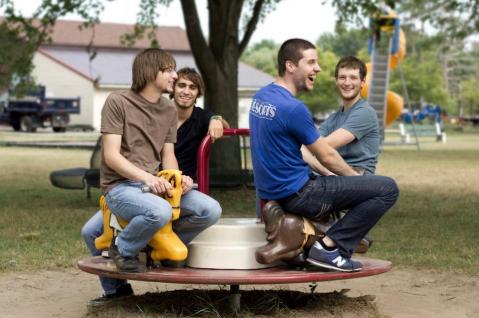 Buffalo, NY groove-rock quartet Aqueous is a lot of fun, both in the way they compose their tunes and how they deliver them in concert. I know some of you will read this, see the word “Jam,” and immediately peg the group as a bunch of Deadhead wannabes, but that couldn’t be further from the truth… Praise Jeebus.

Aqueous plays a very lively, youthful brand of jam-rock, full of melodic intricacy and groovy rhythms that beg for attention. After a laudable performance in front of a ravenous crowd at their moe.down XIII appearance this past year, and seeing innumerable Aqueous pins and merchandise at this year’s Phish NYE Run at MSG, something tells me these guys are on the upswing in a BIG way, so you might as well get onboard now. I mean, they even have their own fan blog already?!

I met up with Mike Gantzer prior to their performance in Syracuse, NY to talk a bit about how and when the band got started, their take on writing music and performing, the Buffalo music scene, and what we can expect from the band in 2013. Rage!

G- Hi there and thank you very much for taking the time to speak with Live High Five! If you would, please introduce the members in the group for our readers… Who is everyone, what do they play, and where does everyone come from?

G- How long has Aqueous been a group, and how did everyone first meet up? Do you remember the moment that you really felt the group “click?”

M- We’ve been playing together on some level for about five or six years now, but I’d say we’ve really taken it seriously in the past two or three years.

G- Though this is probably a silly question given the style of music you play and the crowds that you cater to, are you guys a party band, or generally pretty mellow? What kind of beers and booze do you want people bringing up to you onstage this time around?

M- I think in terms of our personalities, we’re pretty mellow, and the party is secondary to our music for sure. I suppose what I mean is that all of us prioritize a concise, consistent show as opposed to getting tanked and having a good time. (although once the show is over,  it might be a different story)

G- It looks like you guys have a pretty solid tour coming up, and will be spending quite a bit of time on the road this year. How do you guys keep up the pace when on a touring schedule, and how do you occupy your time when you’re traveling between gigs?

M- All of us might answer a bit differently, but generally speaking we try to utilize our free time writing as much as possible, and of course the Super Nintendo in the van keeps us pretty occupied as well.

G- Aqueous has a few albums out at this time, and you are currently supporting your 2012 release, Willy Is 40. How often do you try to record new music, and do you have any plans to jump back into the studio in the near future?

M- We’re about six or seven songs in to a new album, I think we kind of thrive off of writing and keeping everything fresh. Once we’ve got more than enough material to scratch a few songs if they’re not working the way we might want, we’ll certainly be recording our next album.

G- If you could, please you tell us a bit about your tunes. Where did you find the inspiration to write your new material?

G- Do you have a favorite song you have ever written? Why? If you were to give 1 song to someone who’d never heard your group before to try and make a new fan, what track would you offer and why?

M- I ‘d have to say it’s probably whatever the newest thing we’ve written is, but I’m sure our fans would have really specific answers to that! I’d say personally my favorite of ours is a newer tune called “skyway”. It just sort of encapsulates what we’re going for, but all of our songs have something a bit different that someone might dig.

G- What should your fans, both old and new, expect of the performances when you guys hit the road, and what should some of the first time listeners expect to see when you take the stage?

M- Our goal is to give off as much energy as possible, regardless of the venue or size of the crowd. We also try to keep the sets really interesting and like to mix it up as much as possible on our end. A show should be a reciprocal experience between the band and the people watching, and we try to bring that to the table every time.

G- Can you give us a few examples of any bands or artists in particular that influence your style? Additionally, who do you typically like to listen to, and are there any acts you think we should know about?

M- Foundationally, once we were all introduced to the jam scene, that sort of provided us an inspiration to write and create without limiting ourselves musically. Specifically, all of us listen to music from so many genres, jam, rock, hip hop, jazz, etc, all of which influences our music and creative processes. If we had to recommend a band that everyone should know about or check out, hands down it’d be our friends in Dopapod.  Those guys are the real deal.

M- We’ll answer that one with Dopapod as well, for two reasons. Initially, the music that they make and their intense work ethic/general musicianship is something that we’re all pretty inspired by. Secondly, their just really great dudes, and that goes a really long way for us.

M- There’s been a few over the past year that have been incredible, highlights being moe.down for the sheer honor and significance of playing that festival, and a few of the club shows in Erie, Buffalo, and Baltimore were excellent, just incredible energy really.

G- Lastly, as a band that is currently on the rise and building in the music industry, what advice can you give some of the young, up and coming bands everywhere who want to make it in music, on the road, and as a professional musician?

M- I’d like to initially say that we feel a bit silly giving advice as we’re just building our own thing now, but in general the best advice that I can give is this… Take the time to find people you can really get along with that all share the same standards for what you want your band to be, and make music the priority (practice, writing, etc.). Also, it’s incredibly important to have everything as organized and professional as possible; we owe a lot to our manager Josh for handling that end of things so well. Lastly, make sure you’re actually having fun doing it, that’s what it’s all about really.