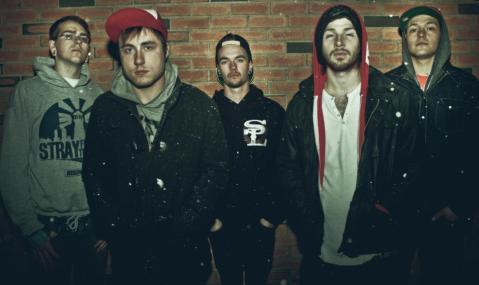 Calgary hardcore quintet FALL CITY FALL are entering 2013 on a very strong note! Having just dropped their new record, Victus, on Victory Records, the 5-piece is hoping to spread their musical sound to a whole new wave of fans in the coming months, and this record may just be the one to do it for them.

Prior to their Canadian headlining run with Slumlord, beginning in March, I got in touch with vocalist Nathan Zorn to talk a bit about the album, working with Victory Records, and what their fans can expect when they hit the stage.

G- How long has Fall City Fall been around and when did you first get started? Do you remember the moment that you really felt the group “click?”

N-We were founded in 2008, but never really got serious until 2010. We just started the band to just play music with our friends, and we always just got along.

G- Dig that. So tell me a bit about where you are from… How is the scene in Calgary and how are the responses at your shows?

N-The scene in Calgary has really grown over the years; it’s more of a big collective family that supports local and touring bands alike. We like to have fun at our shows and we like to ensure that everybody at our shows has just as good of a time with us as we do with them.

G- You just released your latest album, Victus, on Victory Records… What is it like working with such a prestigious label in the hardcore scene, when will you be heading out on the road to support the release? Anything currently in the works?

N-So far, so good! They really get what we’re going for and it’s a very good fit. We will be heading out on a Canadian headlining run with our best friends in Slumlord starting March 1st.

G- Can you tell us a bit about your tunes and where did you find the inspiration to write your new material? Is there any social or political bend to the songs, and are you’re a political/socially conscious group (sxe/vegan/religious/etc)?

N-We just wanted to write an album that really challenged the way people think about the world and question everything, including themselves, like we did throughout the recording process.

G- Do you have a favorite song you have ever written? If you were to give one FCF song to someone who’d never heard your music before, what song would you give them, and why?

N-I think I would show people “Funeralationship” or “Taken”. I feel that a lot of people can connect to those songs regardless of what genre of music you listen to. For us, it’s about the message, and if people like the way we deliver it, then even better!

G- What should your fans, both old and new, expect of the performances when you guys hit the road, and what should some of the first time listeners expect to see when you take the stage?

N-Just raw and real. We aren’t perfect, we don’t rely on backtracks or fancy lights. We just play and a have fun, and hope that translates to the audience and invite them to have just a good of a time with us. We throw ourselves into everything we do and into every performance. Anybody who has seen us live will tell you that we’re a very passionate bunch of guys.

What is the craziest or most memorable show that you have played to date with Fall City Fall? Where was it and what was it like? -

N- Mazzfest 2012 in Saskatoon, SK. The energy from that show was just insane. You would have had to be there to understand how crazy it really was. Blew my mind.

G- Lastly, as a group currently building yourselves, what advice can you give some of the young, up and coming bands everywhere who want to make it in music, on the road, and as a professional musician?

N-Don’t care what people think about your band, just play the music you love and don’t settle for less, ever.