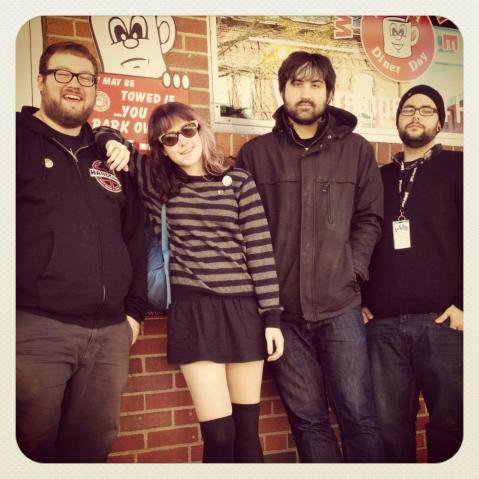 NY/NJ quartet Candy Hearts had quite an exciting 2012 for themselves! In addition to being tapped as an opener for New Found Glory on their 10th year anniversary tour for ‘Sticks and Stones,’ the group also has the honor of being the first act signed to Violently Happy Records, founded by none other than NFG’s Chad Gilbert himself. I’d chalk that up to good fortune!

Still a baby band by all accounts, the group is striving to have a breakout year in 2013, and any artist that has solid drive and ambition should be given a listen, and we wish them the best to come! I caught up with Guitarist/Vocalist Mariel Loveland via email to talk a bit about the group, signing to Violently Happy, and the insanity of going on tour with NFG!

M- Hi! My name is Mariel (Loveland) and I play guitar and sing. Kris (Hayes) plays guitar, Matt (Ferraro) plays drums and Christian (Migliorese) plays bass. I’m from NJ and the rest of the guys live in NY.

G- How long has Candy Hearts been around and when did you first get started? Do you remember the moment that you really felt the group “click?”

M- We’ve been a band for 3 years coming in January, but we’ve all been playing music/writing for most of our lives. I don’t really remember when a specific lineup in this band clicked but I do remember being fired from a job I was trying to quit in 2010 and deciding to just give the band a little more of a chance.

G- So tell me a bit about where you are from… How is the scene and how are the responses at your shows?

M- There’s no real local scene where we’re from. NYC is the closest city and we don’t really identify or feel connected to the Brooklyn or Lower East Side indie scene that a lot of our friends are a part of. We do connect with the DIY punk scene but it’s much more of a thing that spans the east coast than something that’s from our homes – but in a way that’s better. We seem to have good friends that support us/we support wherever we go.

G- You currently have a release out on Violently Happy, Chad Gilbert’s new label. What is it like working under Chad, and how were your performances at NFG’s 10th anniversary shows?

M- Working with Chad is a dream. He’s really driven as a label owner and so creative, supportive and positive. He sees the good in even the smallest accomplishments and gets us so excited and pumped for the future. I’m proud I call someone like him a friend let alone a “boss” guy/partner/producer/tour mate.

The shows were great! How could they not be? I got to see New Found Glory play my favorite record front to back every night. I remember the first time it hit me that we were playing shows that were so important (at least to us!). We were standing on stage in Irving Plaza and they have this screen that they pull up, so we couldn’t see how many people were there when we were setting up. I grabbed my guitar and they pulled up the screen at exactly 7:30 and I saw how all those people in that room looked. I just looked at Kris and was like oh my god!

G- Can you tell us a bit about your tunes? Where did you find the inspiration to write your new material?

M- I found a lot of inspiration in confusing, weird relationships with different people – people I met on tour and people I knew for years. I also found a lot of inspiration in myself and the way I felt, which at the time was somewhere around not so great and rock bottom or so amazing my heart could explode, however I am hesitant to say rock bottom because my body always surprises me in how bad or confused it can feel.

I definitely spent a lot of time walking around my block and staring at a wall, thinking, while writing this stuff.

G- Do you have a favorite song you have ever written? If you could only give 1 songs to someone who had never heard your group before to try and make a fan, what song would you give and why?

M- I don’t have a real favorite because I feel like that’s like picking between siblings. I really do love Flashers Flashing from our first record and Replacement Parts from our new record because I think the former really captures how it feels for me sometimes on tour and the latter really captures who I feel I am as a person and what I was going trough when I wrote the song.

If someone had never heard us before, I would show them miles and interstates. I like the guitar parts in that song a lot.

G- What should your fans, both old and new, expect of the performances when you guys hit the road? I’m not trying to spoil any surprises, but can we expect any new material or special appearances, and what should some of the first time listeners expect to see when you take the stage?

M- I think our live shows are similar to our record but we tend to sound a little louder and a little less pop because it’s just the four of us – no acoustic guitars or bells and there certainly aren’t a bunch of me to sing backups. We’ve been kind of trying to stick with playing our EP but we’ve thrown in and reworked some things from our first record.

M- I write all of the songs alone. I’m really used to working by myself and just spending a lot of time alone trying to work them out in a way ill be proud of. I kind of get a little weird and crazy once I’ve turned on the “I’m writing a record” mentality. I don’t think the guys really want to deal with that, haha. Once I have the skeleton of the song, that’s when we put it all together as a band.

G- Can you give us a few examples of any bands or artists in particular that influence your style? Who do you typically like to listen to, and are there any acts you think we should know about?

M- The Weakerthans are probably my biggest influence. When I’m stuck or having questions about what direction a song is going in, I tend to think “What would the John K. Samson do?”

I pretty much always recommend the Menzingers, Cheap Girls and The Front Bottoms to anyone who is looking for music they may have not heard before.

G- Are there any bands or artists that you hope to share a bill with in the future?

M- I think one of the most memorable excluding the entire Sticks and Stones 10 Year Anniversary Tour was our set at this year’s Fest. We were playing at one of the smaller venues and got added on so last minute I wasn’t sure anyone would come. The whole room we played in had been pretty dead the whole day but when we were going to set up I walked onto the stage area and all I could see was a mess of people who sang all the words to songs that haven’t even been on real releases. I was so surprised.

G- Lastly, what advice can you give some of the young, up and coming bands everywhere who want to make it in music, on the road, and as a professional musician?

M- I think the best advice I could have is always be honest and genuine and try not to get discouraged. In DIY touring and I’m sure even in larger scale touring there are a lot of maybes and almosts or yeses that later are revoked. Somedays are excellent and some are the worst you ever thought possible, at least for me. The second you start rolling with the punches on tour, the second your life is going to instantly be improved. I also need to follow my own advice!