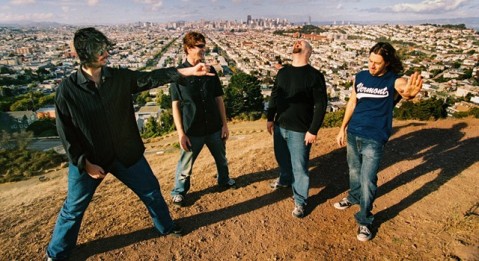 Raq is Baq, and I couldn’t be happier!!! A staple in my college musical diet, the band would play Syracuse University and surrounding areas consistently, bringing their super technical, energetic delivery to small bar stages on a near monthly basis. It was great! As the band progressed in the music scene, I was certain that I’d get to be one of those obnoxious fan/band owners who claimed ‘There First’ rights, but just as the group seemed to really take off, they went on hiatus. I didn’t get it, and it bummed me out.

That didn’t keep the members away from performance, though… Chris can currently be found playing with Conspirator, and Stoops hammers away at the keys with Kung Fu at festivals and packed, sweaty venues pretty much all over the place… Kudos to upward mobility! And I’m not sure if it’s still his primary ax, but Michetti’s used to play the coolest color-changing guitar I’ve ever laid my eyes on. It made for quite a visual spectacle during those often-bent Friday nights!

Slated to perform at this year’s edition of AURA Music & Arts Festival, taking place in Live Oak, Florida from February 15-17th, expect a healthy dose of Sweet Cream Butter to go along with your (probably) toasted Carbohydrates. I know they Are The Enemy, but I’ll keep it on TheDownLow. See what I did there? I caught up with Todd Stoops to talk about the group’s reunion, their various projects, AURA, and what else we can expect to see from them in 2013!

G- DUDE! You guys are back, and that is awesome!

T- We are indeed!

G- That is so good! How did this all come about?

T- Umm, well, we all keep in pretty good touch as it is, and Chris and I have played a lot of festivals recently together with Conspirator and Kung Fu both being on the bill. You know, we’ve hung out a bunch recently.

We always talk about it. You know, ‘Let’s play some shows,’ and it’s tough getting everybody in the same spot and making it all happen, but it was finally time. We had an offer to play this festival, and both bands are already going to be there, so it made perfect sense, and we’re all excited about it. It’s going to be a lot of fun!

G- Now, is this going to be a kind of one-offy type thing? Is everybody who wants to see RAQ going to have to travel, or… Because you must have offers pouring in?

T- Umm, I’m not aware of any of that stuff yet, but for right now, all I’m allowed to say is that you should travel and come see us play.

G- It’d be a great way to celebrate my coming-of-age drinking from back then when I was seeing you during my not-of age drinking. But it was fun!

So, tell me… What has everybody been up to? You have been busy with Kung Fu, Chris has been busy with Conspirator… How about the other guys? What are they doing?

T- Jay has kept very busy. Jay does a lot of solo work, and he plays all over the northeast with a couple of different things. Stuckey is playing on his own as well, at home. We are announcing, though, that Greg will not being playing drums with us. Adrian Tramontano from Kung Fu is going to be playing drums for RAQ at AURA. Greg wasn’t able to make that festival, and we all amicably decided that Adrian was going to be a great fit, so we tapped his talent, and we’re moving forward in that direction.

G- Ok. Now, I used to play “Carbohydrates” incessantly, and until now didn’t realize until recently, because I was all over on tour and musically myself, that you had 2 other albums as well. What I’d kind of like to know is has RAQ been doing any writing or anything like that?

T- We have a tons of songs, old and new, that we’d want to record at some point. And now, being the age where we all have home studios, it’s probably more of a reality now than it was 5 years ago when we’d have to go and do a studio and spend tens of thousands of dollars to produce something like that. So, I’d say the odds are good, but there’s always a question mark. But Chris and I love to write together , and play together, so something like that is definitely a possibility.

G- Nice. Now, getting to the writing process a little bit, you guys ar every technical and have a lot of energy, but it was very straight up. I’d like to know about those writing sessions and those recording sessions actually… What was it like with RAQ, and was it pretty organic or…

T- Chris and I would get together, back in the day, at his apartment, and we’d just spend hours playing music. We would jam, you know, and we’d say ‘That’s awesome… Let’s develop this and do it…’ this way, and we had a lot of material that I brought to the band when I joined in 2002, and we just kind of expanded on that, you know?

Chris grew immensely as a guitarist almost overnight. He was doing things that were next level, so it kind of ramped up as time went on, and it would become more productive. He brings a whole kinds of aggressive guitar playing to the table, so it’s great to be able to write music with that in mind.

G- Can we expect a Van Halen cover again?

G- Because that was awesome, dude! You blew up the stage at Darwin’s with that one. That was great!

Now, you have a lot of fans that are going to be traveling down to the show, and you are going to be playing in front of a lot of new people who’ve never seen you, but probably know who you are because they’ve been waiting to see you… What can they expect of the performances when you guys get down there?

T- We’re going to blow everyone away! Without sounding egotistical or anything, we are very excited to play, and I think that is going to come off. We’re going to play a lot of the hits that people are waiting for, and maybe some new stuff to kind of stretch out a little bit. It’s back to our old motto, just go out there and blow it up!

T- Very understanding wives, I think. My wife is very supportive of it. It’s definitely stressful. It’s a lot harder to do it with a family, with kids, than it is when you’re single and right out of college. When we were young, we didn’t have a problem jumping in a van to do a 3-month national tour. Now, it requires a little bit more planning and so forth and so on.

But it’s like anything else in life. When we were younger, we might have gone a little bit more crazy than we do now, but we’ve learned from our past road experiences not to overdo it and pace ourselves, you know? You want to be healthy at the end of the day. A healthy band is a good sounding band!

G- That is very true. And since you’re on the road so much, how do you occupy yourself in the 22 hours when you’re not onstage, because the road is tough!

T- (laughing) The road is fucking hard, yes. Things have changed. Back in the day, it may have been a lot of partying. Now, like a lot of scrabble and iPhone games. Poker… We really play a lot of poker, and reading and stuff like that. It doesn’t sound so rock and roll, but we’re older. We still have a good time.

G- Alright! So RAQ played with a lot of bands back in the day, and the scene is much larger now, much more popular, and much more populous than it was back then, and you’re going to be playing with a whole bunch of heavyweights at AURA… You ARE one of the heavyweights playing at AURA… If you could put together a 3-band lineup to kind of make your dream bill feasible for RAQ, who would you select to go on tour with you and why?

T- Oh wow! Umm, I mean.. My fream bill would probably be RAQ, Van Halen, and the Chili Peppers. Something like, we always looked at RAQ like… Whenever we would play small clubs, we would look at it like an arena, you know? We always went big! So it would be a classic cock-rock arena situation.

G- Alright, so Van Halen and RHCP… I wonder how David Lee Roth and Anthony Keidis would get along?

G- Now, until that happens…

G- What is the craziest or most memorable show that RAQ has played to date, and their were a bunch of those! Where was it and what was it like?

T- Oh man. Right off the bat, maybe our NYE shows in Charlotte, North Carolina back in 2006 or 2007. Or we played in Knoxille, Tennessee at the Bijou Theater and that was pretty crazy. A lot of those big, holiday shows were pretty intense.

A lot of it is foggy, if you want me to be honest, but you catch glimpses. What you maintain in your memory as a musician are glimpses, or a moment… Not so much the whole show, but a moment, and some of those are too numerous to count.

G- Right on! So, the last question I want to ask you… you’ve been doing the music game for a long, long time. You’ve been on the road, you’ve been on tour, and the band dream will never die.

There’s a lot of kids out there that are trying to do exactly what you’re doing. They want to be on the road and they want to be professional musicians. What advice, from your experience, can you give to some of the kids, the young, up and coming bands to make it and really sustain themselves like you have in the music industry?

T- I would say if you’re young, and you don’t have pressing responsibilities, and you’re able, get out there and play as much as you possibly can! Go out there and play 300 nights a year, go absolutely nuts. Play a bar in Omaha, Nebraska on a Tuesday night in front of 20 people. Do that, you know, because they’re going to go home and say ‘Holy shit… I just got my ass kicked!”

Play, play, play, play, and write good music. Spend time honing your craft, because later on, that’s when it counts. If you put the time in early, and really hone your craft, you’re going to create something that can stand apart a little bit, and it’s gonna result in more longevity, I would say.

G- Nice! Excellent! Well, we’re here for Kung Fu, but we were just talking about RAQ and it was awesome! Thank you very much for taking the time to speak with Live High Five today!