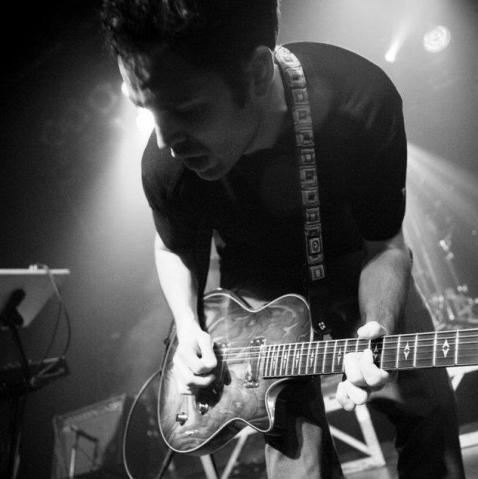 Energetic, electro-rock quartet Jimkata may be one of the best examples of a band that caught a serious break when electronic dance music and acoustic instrumentation caught the mainstream music industry’s eye. With heavy bass drops, sprinkled with tasty melodic embellishments and groovy instrumentation, Jimkata are a perfect fit within the new wave of electro-jam rock.

With lots of performance experience under their belts, Jimkata is currently back on the road supporting their latest release, Die Digital, which is not only excellent, but also fully fan funded. Bands with fans can get things done, and aspiring players should look to Jimkata for inspiration and motivation.

With a featured Halloween performance in Syracuse, NY and a special New Years Eve show happening at The Haunt in Ithaca (Thanks to Dan Smalls Presents!) Jimkata will be blessing Upstate with some spectacular holiday musical magic! I got in touch with guitarist/vocalist Evan Friedell to talk about the tour and holiday shows, their approach to electro-rock, and what we can expect from them in 2013!

G- Hi there and thank you very much for taking the time to speak with Live High Five! Introduce the members in the group… Who is everyone, what do they play, and when did you guys get started as a group?

Aaron, Packy, and I got started years ago as wee lads growing up together playing grunge and punk covers. Packy and I met Dave at college and by that time our musical tastes had expanded to all sorts of stuff. We started jamming and playing out, and now here we are.

G- You recently release your fully fan funded release, Die Digital. What was it like to hit your funding goal, and can you tell us a bit about your tunes? Where did you find the inspiration to write your new material?

As a completely DIY band, you’re always concerned about where money’s gonna come from for your next endeavor. We’re broke individually and as a collective most of the time! We run off love baby! So, when we went out on a limb and turned to the fans for support and they gave us a big “Hell Yea” we were really grateful, surprised, and humbled.  It feels like a validation that our music is connecting with people on a higher level and also a cool underground power of the people, stickin’ it to the industry kind of feeling.

It’s kind of ironic that a lot of the lyrical material is commentary on life in the digital society and yet the album was borne from the positive aspects of the digital world.  With our usage of the internet increasing drastically over the last ten years, sometimes it feels like we’re more connected with the world but less connected to ourselves.  We can know what tattoo Snooki got on her ass–in fact you could probably have an alert on your phone for that– but are we also making lasting memories with each other and staying connected on deeper levels.  I think we are and some of the feedback we’ve gotten on this album from people has proven that to me.

G- Do you have a favorite song you have ever written, or if you were to give 1 song to someone who had never heard of Jimkata before to try and make a new fan, what would it be and why?

Man, that’s tough… It really depends.  Right now I’m feelin’ a lot of new album stuff.  I love “Chain store” as just a fun party track.  I love pretty much everything off the new album right now cause I’m feelin’ super proud of how it came out.  But we’ve learned from playing live that we have a pretty broad spectrum covered in our songs and that you never know what’s gonna turn people on.  I leave this job to our fans!

G- I’m a fan of the Cheeseburg, but what is your favorite calzone to get when you go to DP Dough in Ithaca, NY?

I haven’t had DP Dough since I was 18 and really drunk!  I don’t even remember what kind of shit they put in those things.  It was hot and cheesy and that’s usually what one craves at 4am.

G- Are you guys a party band, or generally pretty mellow? What kind of beers and booze do you want people bringing up to you onstage this time around? Do you participate in herbal remedies, and do you think we will see legalization in the near future?

It really depends on the night and where we’re all at physically and mentally.  Sometimes we’re pretty beat from touring.  But you’re likely to see at least a few of us getting rowdy late night at festival somewhere and booze is always welcome on stage!  We’ve made some lasting connections with people by hangin’ out ‘til the wee hours.

I think I participated in herbal remedies a little too much when I was younger and now if I’m not careful I just get the paranoia part!  But I think we’re already seeing legalization in the works in certain states and I’m in full support.  When we were in Colorado I was hearing all about the ballot measure that’s up for a vote there in a week.  I see no reason why it shouldn’t be treated like alcohol, in fact I see it as way less harmful.

G- What should your fans, both old and new, expect of the performances when you guys hit the road? What should some of the first time listeners expect to see when you take the stage?

Well, right now we’re playin’ pretty well together after playing so many shows.  We’ve been perfecting the new stuff but I’ve had older fans come up to me surprised that we busted out some older song too.  So older fans, expect to see (pretty much) everything.  Newer fans, join the dance party! Have a couple drinks, you’ll be fine!

Usually Aaron or I come up with the beginnings of a song and we all hash it out together and I add the lyrics.  Lately, Packy’s been composing some hot new beats too.  Usually how I write something is by getting a little idea in my head, making a rough demo in Logic, then as it starts to fill out more I bring it to the band.  For me sometimes it’s just a beat, sometimes the lyrics come first, sometimes it all comes at once—that’s the best.

G- You’re currently building up your fan base and doing well, but are there any bands or artists that you hope to share a bill with in the future? If you could select 3 bands in addition to Jimkata to share a bill or tour, who would they be and why?

Okay dream level: Flaming Lips, My Morning Jacket, Phish.  Just cause I love those bands and feel like fans of those bands would also like Jimkata.  On a more realistic level at the moment, I’ve enjoyed sharing the stage with Papadosio, Rubblebucket, and Passafire.  Also, because I love their music and feel some kinship with bands coming up at the same time and trying to do something original.

G- What is the craziest or most memorable show that Jimkata has played to date? Where was it and what was it like?

Two of my favorite shows recently have been the Fillmore in Denver with Umphrey’s McGee and Grassroots after midnight to a wild crowd.  In Denver it was just the thrill of playing to so many people and at Grassroots it was playing to so many people that really know your music.  The energy at that show was off the hook plus we got to do some fun collaboration with other musicians.  We played “Canned Heat” by Jamiroquai with Maddy from the Blindspots and Big Mean Sound Machine horns and percussion and it was just instant party for everyone there.

G- Lastly, as a group that is currently building yourselves, what advice can you give some of the young, up and coming bands everywhere who want to make it in music, on the road, and as a professional musician?

Hang in there!  Be a lifer.  Work hard and put your whole soul into it. Really those are some of the toughest lessons we’ve had to learn over the years. And they’re sort of general life lessons as well.  Sometimes things are good, sometimes they’re bad and you wanna quit.  But don’t quit! Nothing good comes easy, and always appreciate it if anyone at all appreciates your music.  Hell, I gotta remind myself of these things all the time.