Interview with Jonnie Baker from THE GROUNDBREAKING CEREMONY! @GCBrock 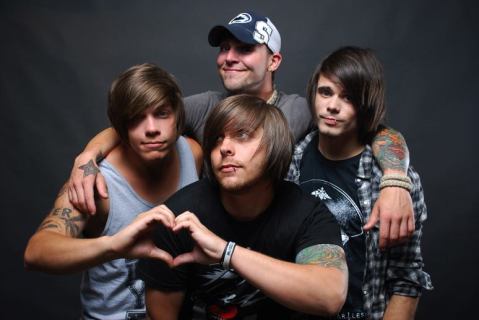 The Groundbreaking Ceremony is a pop punk band, pure and simple. Pop punk dead? Never. There’ll always be kids getting into Punk via the newer, friendly style of bands, and Punk’s history is strong enough where, one would hope, these new fans will find inspiration and passion for the oft-maligned art form through these contemporary artists.

And make no mistake… The Groundbreaking Ceremony is a very good example of what the kids are into these days, and blew their fan base wide open this past Summer as they strutted their stuff on Warped Tour for the entire run. Though not what it used to be, Summer’s most anticipated punk rock tour has managed to stay current with upcoming talent, and gives many artists their first real taste of fame.

Reintroduced through a mutual friend, I had the opportunity to catch up with lead singer Jonnie Baker to check in with the group and see how things are going.

G- If you would, introduce the members in the group… Who is everyone, what do they play, and how old is everybody?

Jonnie- “I do lead vocals, Scott Southlea is on Guitar/Vocals, Nick Walters plays Bass, and Dirk Smith is on Drums, and all of us are in our early to mid 20s.”

G- Where are you guys all from?

Jonnie- “Most of the band is from Central Pennsylvania, and I live in St. Louis. We’re pretty good about constant communication though, so honestly the distance doesn’t affect my involvement with the band. We still get together to write, rehearse for tours, studio trips, etc.”

G- How long has The Groundbreaking Cermony been around and active? When did you first get started?

Jonnie- “The band started years ago and went through several lineup changes since its inception. We are confident that with our current status of writing and performing, that the lineup we have now is a pretty solid one. We’re operating as a quartet while we audition and search for a permanent alternate rhythm guitarist/lead guitarist. For the most part though, GBC has been around since about 2008 in a serious manner. I came into a much different lineup in 2008, and now in 2012, it feels like we’re finally where we want to be. The core is still there, you know?”

G- Where did the name come from and what was the inspiration behind it?

Jonnie- “Well, when Dirk was in his high school years, he had a typing class that had an exercise to type out an article that was being displayed. The title of the article was “The Groundbreaking Ceremony”, and it was something that really struck him. So he brought it to the line-up at that time (before I was in the band), and it stuck. It’s a long name to work with in terms of logos and branding, but we do what we can, haha.”

G- Do you guys have any releases out right now? Does the group currently have anything in the works?

G- Can you tell us a bit about the tunes?

Jonnie- “The songs on this latest record our easily our best effort to date. I’d say we are pop rock/punk with some extra balls. We had such a blast writing and recording these new tracks. We released it in June and it’s available on every digital media outlet. We obviously released it cross country on Warped Tour all summer as well, as we were on the entire tour.”

G- What is your writing process like? Who in the band typically comes up with new music?

Jonnie- “We’re pretty firm believers that there’s no right way to write a song. Some of the songs are envisioned from the beginning and are written around a core group of ideas or musical concepts, and everything just works to gravitate towards the vision we share for a certain song. Sometimes, someone writes a riff, and brings it to the table, and the music gets fleshed out by everybody (even me, sometimes), and then the vocal melodies and lyrics get laid on last. It really just varies, depending. As the lyricist, I usually have my lyrics written before the songs are even started, and when it comes time to applying them to the music in the songs, I’ll end up rearranging the words, or dropping parts altogether, to keep pentameter, or to make them work the best they can with the song. Like I said, it really varies from song to song. If it’s all formulaic, how fun is that?”

G- Any bands in particular influence your style? Who do you listen to?

Jonnie- “This is where we really get eclectic. We go all over the place in the spectrum of music we like. I like bands like dredg, deftones, The Used, Linkin Park, and more. Nick loves bands like Mötley Crüe, Halifax, and bands like that. And then there are bands that we all come together on, and those are bands like Senses Fail, All Time Low, New Found Glory, Taking Back Sunday, The Used, and Blink 182.”

G- Any bands that you hope to share a bill with in the future?

Jonnie- “Warped Tour alone fulfill a lot of that this past summer. There’s really just too many to start naming — but definitely with any of our influences listed above. Some of them already came true, haha.”

G- What’s the craziest show you’ve played to date? What was it like?

Jonnie- “I always love getting this question because honestly, it really isn’t just one. We’ve had shows we’ve played to 40 kids that were absolutely insane, and shows we’ve played to 1,000+, that just were average. We always gauge which shows are the craziest and the best by our crowds, and rather than tell you which shows we like, we’ll tell you why we liked them. When you start a set, and the crowd is scattered amongst the venue or room, and you start calling them to the front of the stage, and only a few come, you can get discourage. Or you can become even more driven. We choose to become more driven, and do our best to put on the most electrifying and sensational show we can, and bring all the energy we can. You aren’t ever done proving yourself, and that’s the most important thing you have to learn. There’s no room for complacency. You have to go big, every time, every night, and for every person in that room. The moment when you change people’s opinions of you, and they begin fighting to be at the front of the crowd just to touch you, and they start singing the chorus because they’ve heard it once and know all the words or even just a few — that moment is powerful. It’s inspiring, and it’s honestly why we keep doing it. Our craziest shows are the shows when we hit up a B-Market on a tour, and the kids have only just heard of us, never heard us — and then they see us play, and are immediately changed forever. They go nuts, they’re crowd surfing, they’re starting pits — and we’re pop rock/punk. That’s a truly special feeling, and definitely the kind of show that brings us back for more. We’ll play one off dates on a tour for next to nothing if we know the crowd there last time just absolutely killed it in front of us.”

G- Lastly, what advice can you give some of the young, up and coming bands out here who want to make it in music, on the road, and as a professional musician?

Jonnie- “Be in it for the right reasons. Don’t do it to make money — 98% of bands won’t make any for the first few years. Set timely goals, and work hard to achieve them. If you work hard, and are dedicated, it doesn’t matter how talented you are — you’ll succeed. The moment you want to succeed more than you want air in your lungs, you’ll have made it. Henry Rollins of Black Flag once said, ‘I didn’t have talent, I had tenacity.’”