Interview with Joshua Waters Rudge from THE SKINTS (@theskints); Someone bring them to America already!!! 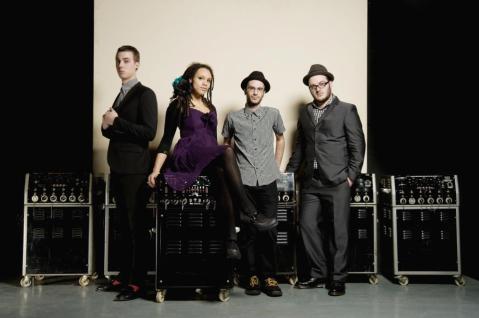 The Skints need to come to America, like yesterday. Representing East London Reggae, this UK quartet’s brilliant mix of ska, dub, reggae, hip hop, and punk is possibly the best thing I’ve heard come out of the current wave of the underground in a long time, and we needed it. If you need even an ounce of proof, watch this video for “Ratatat.” Go ahead… We’ll be here when you’re done.

Formed in 2005 and still a very young band, The Skints have been blowing up the UK reggae circuit with their hard yet wonderfully poppy sound. The tremendous backbeats and rhythms by Joshua Waters Rudge, Jamie Kyriakides, and Jonathon Doyle, when coupled with gorgeous front woman Marcia Richards’ effortless flow and bouncy delivery, makes The Skints a mandatory purchase if you like UK’s reggae, or a hell of a good way to start!

Constantly touring to support their latest release, Part and Parcel, on Penny Drop Recordings/Bomber Music, and I can’t help but think that, once the crowds get a taste of them across the pond our way, sales of the album will blow up! Though still waiting on tour dates here in the U.S. (NY, in particular), I had to get in touch with these guys to get some back story on their formation, recordings, extensive touring, and whether we can expect a stateside visit in the near future. I spoke with (BAND MEMBER HERE) to get the lowdown on all of it below. Bring The Skints To America!

G- The Skints first formed in 2005, so you’ve been around for a little while. When did you play your first public performance, and do you remember the moment that you really felt the group “click?”

J- Well the name has been kicking around in a couple of forms just from school and local from 2005, but the 4 of us got together in May 2007 and started playing shows around London. Before that we did some shows at our local venue, The Standard in Walthamstow, which was the first ever goal we wanted to achieve!

G- So, as someone who has never experienced the UK Reggae scene up close, can you tell us a bit about where you are from… How is the scene and how are the responses at your shows?

J- Well we actually started playing shows and touring within the UK punk scene, because the reggae scene is mostly DJs and sound systems, and live bands and live gigs are few and far between if you want to tour A LOT. Nowadays we’re a lot more involved in the UK reggae thing, mostly through people we’ve worked in the studio with like Prince Fatty and Mad Professor, but also on a live level with people like Natty and the Ras-Ites. Since we’ve become a bigger festival band we play with and know a lot more of the UK dub and reggae people, but truth be told, we’ve always tried to play with as many different bands and artists as possible. When we play, we bring The Skints, whether it’s a reggae crowd or a punk rock crowd or a pop crowd or a festival, and the responses are generally positive and upful!

G- You are currently touring in support of 2012’s Part and Parcel, and it’s an incredible album! Are you working on any other releases/remixes/projects right now? If so, when will you be heading back to the studio?

J- We’re actually writing a couple tunes at the moment, so hopefully we’ll be coming with some new music early next year. We have a couple dubs in mind too.

J- Every song is different you know. The three songwriters and lyricists are myself, Jamie and Marcia. Sometimes we’ll write a tune ourselves then teach the band, other times we’ll all get together and collaborate on a song, other times people write parts for others to sing, always different! The riddims we construct in the practice room to see what kinda vibe we’re gonna have and let Jon bless the bassline and what not.

G- The Skints obviously have the ability to bring the party, but are you guys a party band, or generally pretty mellow? How do you spend your time when traveling in between gigs, and what kind of beers do you all enjoy?

J- It all depends! Sometimes we just like to go to bed after a show, other times we’ll hang with friends and have some drinks if people are around, other times we’ll go out and find a hip-hop night and be dancing till 4am, it all depends on the vibe of the evening! When we’re on tour we watch a lot of different stuff in the van, or have music listening sessions or just talk and abuse each other! We’re not a big beer band, we enjoy various spiced rums with crazy juices, and Jagermeister when it’s party time!

G- What should your fans, both old and new, expect of the performances when you guys hit the road? I’m not trying to spoil any surprises, but can we expect any new material or special appearances, and what should some of the first time listeners expect to see when you take the stage?

J- With every tour we’ve ever done, whether it’s headline or support, we try and up our game and bring more than we ever have done before. This also means keeping sets fresh so we try to give people who have seen us before something they haven’t seen as well as first-timers seeing exactly what we’re about. That could be playing album songs we don’t always do, maybe a new cover or bringing on a special guest such as our main man Parly B.

G- Can you give us a few examples of any bands or artists in particular that influence The Skint’s sound and style? Who influenced your formation, and who do you typically like to listen to? Are there any other acts you think our readers should know about at this time?

J- There is so so much, I could be here all day. A real compliment that people say to us is that we don’t really sound like anyone else, which we strive for, but obviously we take influences from so much music that there is obviously stuff in there people can hear. Obviously we love our reggae, roots, dub, ska, rocksteady, steppers, dancehall, all kinds of Jamaican music, from Johnny Clarke to Ninjaman to The Skatalites to King Tubby to Desmond Dekker to Super Cat to Phillis Dillon – the list goes on! We’re also big punkrock fans, we’re really into classic soul and Motown, American hiphop, London grime, so much! I would recommend people check out our friends Parly B, Random Impulse, Claypigeon and Gecko if they’re looking for new music!

G- You’ve already toured with some of the most popular acts in Ska and Reggae, but are there any bands or artists that you hope to share a bill with in the future? If you could feasible pick a Dream Bill for The Skints to be on, who else would be on it?

J- It’s a shame, because so many of them are dead unfortunately! I would love to share a stage with Damien Marley at some point…like you said we’ve played with so many of our heroes, I’d like to do more shows with many of them! The Slackers and Bedouin Soundclash are 2 of my personal favourites who we’re friends with… I don’t know, I’ll say The Specials.

G- What is the craziest or most memorable show that The Skints have played to date? Where was it and what was it like?

J- We finished our tour in London on Thursday and that was kinda nuts. It was sold out, 1000 people and it was weirdly emotional for us to come home to that.

G- Lastly, as a group that is making their way up the music business currently, what have you learned about making things happen for your band, and what advice can you give some of the young, up and coming bands everywhere who want to make it in music, on the road, and as a professional musician?

J- Do not stop playing gigs. Don’t turn a gig down. Don’t be proud about money. Your band has a worth, but you have to prove that to everyone else first. Talk to everyone. Respect your fan base. Give everything back you can. Don’t be afraid to bug people. Keep it real.