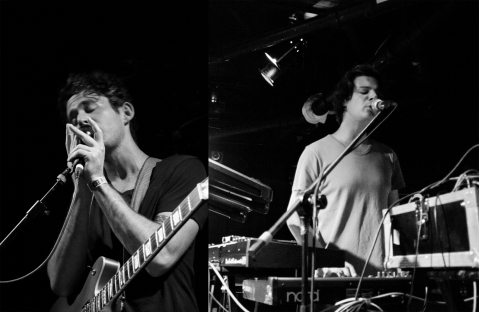 Review and Live Photo by Sara Joy Tiberio, because she rules!

The Antlers, decked out in skinny jeans and a few quirky tattoos, walked onto the more intimate club side stage at Water Street Music Hall. The crowd erupted, but then quickly quieted so they would get right to the music. The Antlers are a band that tells a story with often melancholy, dark lyrics and radiating sounds that blend the songs together. One fan, David Abbott, described the band as, “ambient, but not the kind where you can just listen to it in the background.”

I wanted to hear one of the albums played straight through, because of the way the songs bleed into each other, but it was interesting to get the mixture of the darker songs from Hospice and the more upbeat, hopeful (yet, still nostalgic) ones of Undersea. I was really impressed by their most recent release in the way the lyrics of the songs subtly hint on the theme without being too repetitive or cliché; that can be hard to do. They’re also the only group I’ve discovered that release an artist statement to go with their albums. They had this to say about Undersea: “It’s both the comfort of knowing that some questions have no answers, and the torment that we’re never meant to know the truth.” There seems to be very spiritual meaning in both the musical intentions and the sound they create. I mean, if you’re whole body doesn’t feel electrified when you’re standing there listening to them, I just don’t know what to tell you.

These guys can lull you to sleep, bring you to tears when you need to cry, or leave you with a faint smile and a warm feeling inside. Lead singer Peter Silberman is the type who makes love to the microphone while singing. You know, just clasping it with both hands, singing, his mouth less than an inch away from it. But that’s really so perfect for this kind of music; It demands you to lose yourself in it. I appreciated the times in the songs where it felt like the independent rhythms were getting complex and things could just fall apart, but they really came down on the beat together. The lyric from their opening song (“Dissolving into a million pieces in a billion places”) reflects on the feel of their music as a whole when you’re listening to it. The echoing and resonating of the notes really give a sense of the infinite.

The crowd was a bit chatty, which made me cringe when the band was at some really soft, delicate volumes, but perhaps crowds are always chatty, and the intensity of dynamics in this band just made it really noticeable. I wouldn’t say that it affected the show in a crucially negative way.

Coming home with a signed vinyl clutched in my hands, ears slightly ringing, I felt satisfied… The way you feel satisfied after a hot cup of tea on a cool morning. The people that are into The Antlers LOVE The Antlers. That was clearly something undeniable.

The Antlers are a fitting band for autumn, I might add,  especially when the leaves are turning and the trees and plants are dying in preparation for winter… These songs definitely echo transformation, death, and renewal.