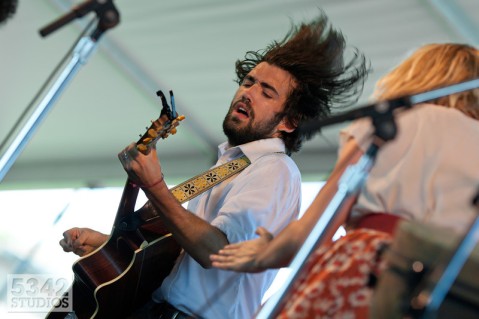 Tom’s River, NJ octet River City Extension is a band you fall in love with. I did, and if you give them a chance, you probably will, too. During SXSW 2012, I booked the 8-piece group from my hometown of Syracuse, NY, confident that the venue I was dealing with would make every accommodation for traveling acts and out of state promoters. Ahem… Beware, and get a contract. Lesson learned.

As difficult and frustrating as the experience was for me personally, River City Extension were incredibly gracious and friendly people, and getting to watch such an unbridled wealth of talent as they, quite literally, expanded all over the inside of a sports bar floor, was one for the ages. Pretty good luck for me, given the group had just returned from Australia where they played to thousands, and I here was on the verge of a nervous breakdown, dealing with complete idiots at the venue, save for the gorgeous southern girls behind the bar. The 20 or so fans and friends in the bar sang, drank, and danced along happily, and all was right with the world… for 45 minutes. It’s times like these that you remember why you are involved in such a volatile industry as music in the first place. It may have been a week in Hell for me, but the two 15 year olds girls who came to the show with their Catholic priest father were astounded by their good fortune.

As for the band, at least all of the members have short names so you can remember them… Maybe. Currently on the road supporting their latest (incredible) release, “Don’t Let The Sun Go Down On Your Anger,” on XOXO Records/Anchor & Hope Music, with vinyl being handled by our friends over at Asbestos Records, I spoke with guitar/vocalist Joe Michelini about their tour, the new album, and fond memories from SXSW.

G- Hi there and thank you very much for taking the time to speak with Live High Five. If you could, please introduce the members in the group… Who is everyone, what do they play?

J- Well we’ve been an eight-piece group for a while, and we all switch around instruments from time to time. In list form, it goes like this:

G- Do you remember playing at Weirdo’s in Austin during SXSW and the debacle that ensued? What did you think of that show, and the SXSW marathon experience as a whole?

J- I absolutely remember it. Those are the best type of debacles! If a club is ever too small to fit us onto the stage, I think we instantly go into creative mode. That day it just seemed right to go 100% acoustic, so we did. It was a blast.

SXSW was good for us. It always is. Band vacation with a little work and even less sleep thrown in. We really enjoy it.

G- Well, I’m glad your have fond memories of it, because the remaining 4 hairs in my head took an extended leave of absence after that chaos. You guys made my day! So how long has River City Extension been around and when did you first get started? How hard was it finding 8 musicians to get the current lineup up and running?

J- River City Extension (in some way shape or form) has been around for 5 years this August. I don’t know that I ever set out for eight, it just became eight. So, in that way, it was easy. Some people have come and some people have gone. That’s just the way it is in a group this big.

G- I think after 7, the word “band” should be changed to “mob,” but that’s for another interview. Can you tell us a bit about Tom’s River, NJ and the musical scene out there… How is the scene and how are the responses at your shows?

J- You know, I was never really in the music scene for most of my life. I feel like I’m still discovering it. It seemed like any other band’s story; we just started playing small shows that turned into slightly larger shows that turned into opening slots, etc. There is a great support system in New Jersey though, that’s for sure. We had a lot of help from bands in Toms River as well as Asbury Park. People who took an interest in the band weren’t hesitant to share it, and ultimately that’s what got the ball rolling. We owe everyone here our lives for that. The shore will always be home.

G- Right on. NJ seems like a great place to begin a musical career; A very proud and encouraging state for music! Could you tell us a bit about your personal influences as a musician for a moment? What albums or artists have influenced you as a performer, and what bands are you currently listening to for pleasure?

J- The most important? Probably some of the first Bright Eyes records, Jim Croce, things like that. I didn’t start thinking about it until I started being asked that question to be honest. Frightened Rabbit’s “Midnight Organ Fight” and Guster’s “Keep It Together” are two big ones. Right now I’ve been listening to “Album” by Girls, “Mumps, etc.” by Why? and anything by The Books.

G- Hmmm… I’ve only heard of one of those groups at this time (Why?), so it looks like to iTunes I go. So, River City Extension has a long list of amazing songs, and it is really something to see everything come together when you perform live. Can you tell us a bit about what is your writing process like? Who in the band typically comes up new music?

J- I bring the new music to the band, and then we typically arrange it together. My writing process is in a bit of a transition. This next record will be the first one where I will have sat down to write the songs intentionally and with certain content in mind, as opposed to just waiting for inspiration to strike and picking the best finished tracks of the last year or so. That’s a little more like what the last two records were like.

G- Very cool… I’m pumped to hear how the songs written around the new method turn out. I also wanted to ask about shows that have meant a lot to you… Can you tell us a bit about the most memorable show River City Extension has played to date? Where was it and what was it like?

J- Probably headlining Bowery Ballroom for our record release show at the end of this summer. It was an excellent show. We have always wanted to headline there and I think we all finally felt prepared. Probably the most excitable audience we’ve had to date, and certainly the most fun the band has had at a gig to date.

G- Awesome! I heard great things about that show, and wished I still lived in NYC so I could have made it. Next time, perhaps 🙂 Sold out crowd, if I recall correctly!

And to finish up, as a large group of profession touring musicians, what advice can you give some of the young, up and coming bands everywhere who want to make it in music and on the road?

J- Real success is a lot further away than I thought it was when I started. That being said, there are a lot of exciting steps between here and there. It’s a lot of work, but it’s a lot of fun. We are still in the first quarter of our career or less so I don’t know how much actual wisdom I can impart here but, I guess be yourself. Be yourself onstage, offstage, and in the studio. Or at least be consistent. Even then though, I don’t know if I’d buy it (we’re looking at you, Devendra Banhart). It’s just best to do what you are for who you are. Otherwise it’s paper-thin. People will tear right through you and move on.