Interview with John and Gabriel from Consider The Source. Playing @CatskillChill next weekend! 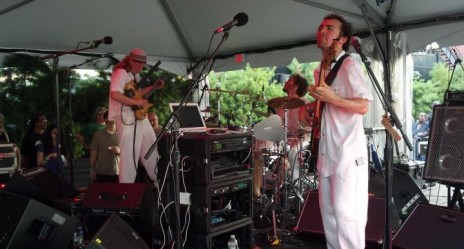 “Sci-Fi Middle Eastern Funk, ” as New York City’s Consider The Source describe themselves, kind of makes me think about Bootsy Collins riding on the Millenium Falcon hovering over Saudi Arabia. Seriously though, can’t you just visualize it? Maybe not, but if a power trio takes this much effort to define their sound, I can only imagine what their rehearsals are like. I’m sold.

Consider The Source’s mystique lie in their multi-directional approach to writing, a fusion of complex rhythmic patterns, partially learned when the group spent time studying talas in India, with a blend of driving rock, psychedelic sound scapes, and Middle Eastern flair. The group continues to forge their path into the musical spotlight, performing at a very wide array of venues and festivals all over the world. These appearances include slots at Burning Man, PowWow, and Dogwood Fests alongside such acts as Victor Wooten, Wyclef Jean, Grace Potter and The Nocturnals, and many others.

With a hefty touring schedule on their plate, Consider the Source will be bouncing around all over the East Coast prior to their trek across the pond to Germany in October, and are one of the featured acts on this year’s Catskill Chill Festival happening September 7-9th in Hancock, NY. Check out this lineup!

I got in touch with guitarist Gabriel Marin and bassist John Ferrara prior to their performance at the Chill to ask them about their live show, the essence of their recordings and live shows, and the foundations of their Indian and Middle Eastern influence.

G- Hi there and thank you very much for taking the time to speak with Live High Five! Introduce the members in the group… Who am I speaking with and what do you guys play?

G- Catskill Chill will be the first time I will get to see you live and my buddy Brian at Nimbleslick (CTS’s booking agency) says that your shows are magical! How long has Consider The Source been around and when did you first get started?

John- CTS has been around since around 2003/2004. It’s hard to remember exactly when, because we started out just playing together, not necessarily trying to be anything.

Pinpointing exactly when we decided to be an actual band is sort of ambiguous. It started when Justin, our old drummer, jammed with Gabe at a party and realized that they had a lot of similar musical interests. I then got into the mix because Justin and I had been playing music together since childhood. The three of us got together and played and had an instant chemistry and have been riding out that vibe ever since.

G- Cool so you’ve had a while to really get in tune with each other’s style… I can dig it. So, besides huge and bewildering, how is the music scene for you in NYC and what venues have you played or are you trying to play? How do the responses at your shows in the US and abroad differ from each other?

Gabriel- The NYC music “scene” is so varied that it cant really be called a scene. There are a bunch of different scenes, and they are a little mutually exclusive from each other. For example, the music that most people think of when they think of the NYC stuff is the Brooklyn electro pop rock or whatever, which we are totally removed from. That scene is almost entirely how you look and dress and muscially isn’t very inspiring.

But on the other hand, the cutting edge modern jazz stuff that happens in the city is the most exciting music coming out nowadays, in my opinion. Amazing musicians really pushing themselves, their creativity, and instruments to the limits. That is what inspires us.

The crowds are lovely all over the world.  Our fans are great and open-minded. Honestly, the differences are that clubs treat you far better overseas — better food, better pay, and better lodging.

G- That seems to be a running motif of the bands I interview, and it’s kind of a shame. We have to try harder over here in the states. To speak about recordings for a minute, do you currently have, or are you working on, any releases right now? Anything currently in the works?

John- Gabe and I have been writing like crazy. We have about three albums worth of material that just needs to be worked on that we are super excited about, but we play shows every weekend and tour multiple times a year. This September, we’ll be doing festivals and a lot of other shows in the Northeast, including a 2 night run at Sullivan Hall on 9/21 and 9/22. Soon after, we fly out to perform in Germany and Israel, and then we’ll be touring up and down the east coast until the end of the year.

So realistically, it’s looking like recording is gonna have to wait until 2013. As frustrating as it can be to not be able to put all these ideas down in the studio pronto, it does give us a lot of time to develop the songs live.

G- Yea I suppose so! 3 albums worth?! That’s a lotta hooch!  So do you often write new music when you are on the road, and how else do you occupy your time when you’re traveling between gigs?

John- Ohhhh yea. We spend a good portion of our lives on the road and ideas come to us all the time. We are always around each other, listening to the same music, often reading a lot of the same stuff or at least talking about it.

G- Nice! Now, you guys are a very musically diverse band… Could you tell us about how you came to incorporate Middle Eastern and Indian music into your songs? Where did you find the inspiration to write such material?

Gabriel- It’s not a concious thing, which is why our fusion works naturally. When studying the different musics, we really learn them authentically, so it just becomes part of our playing.  At this point, the different Indian or Balkan or Middle Eastern ways of playing just come out naturally. It’s an ingrained aspect of playing.

Personally, the inspiration to get into these different kinds of music came when I was a little younger and had developed a lot of technique, but most technical music I heard wasn’t soulful or expressive. Then, I heard all this incredibly well played music that was just the most emotional thing, devoid of any fashion or being in a scene or whatever, and that was very appealing. So I jumped into the worlds musics and the modal/free jazz and haven’t looked back.

G- What can people who have never seen you before expect of the performance when they see you on the road? What should some of the first time listeners expect to see when you take the stage?

Gabriel- Hopefully to have an experience that they have never had before… To be emotionally touched and blown away. I know that sounds like a big thing, but we hold our selves to a high standard and really try to deliver a different show every night. Even if we play the same songs, our improvisations go new places every night.

G- That’s an excellent way to put it, man. One of the most important parts of listening to music is to connect emotionally. If that doesn’t happen, you’re just a spectator rather than a participant. Now does everyone in the group contribute equally during your writing process, or does Consider The Source have a primary songwriter? How often do you write new material, and when can we expect a new release from the band?

John- We work in a very collaborative way. Gabe and I are in a sense the song writers in as much as we write the riffs and sometimes entire songs. Sometimes I’ll have half a song written and he’ll have half a song written and then it becomes a whole song. But even when I write a piece or a part of a piece, I don’t feel like the end product is mine, but ours. We haven’t written a new song since Justin left the band but when he was in it he would take these ideas that we’d bring in and not only come up with the best drum part you ever heard, but would also bring a ton of ideas on how to bridge sections together. We allow each other to take the idea and run with it so the end product is three voices combining to make one.

G- Very cool. So, I am told that you recently had the pleasure of sharing a stage with the side project of King Crimson Projekt! How was that experience for you, and are there any other bands or artists you hope to share a bill with in the future?

Gabriel- That was amazing!!! When I was first getting into more creative music, Crimson was a hugeeeee influence. They didn’t bow to any trends and played long, heavily instrumental tunes!

There are a tons of bands we want to play with career wise. Personally, The Bad Plus are our favorite band and playing with them would be a huge honor, as they have been a huge inspiration.

G- I hope you guys are able to make that happen in the near future… That’d be a sick lineup! Can you describe for us your most memorable show to date? Where was it and what was it like?

John- There are so many, but playing with Victor Wooten was for me personally one of the most memorable. He is a hero of mine and from the second we got on the bill with him, I practiced like a maniac. The most significant part was the moment right before we started playing. I was freaking out and thinking, “Oh my God, I’m gonna suck in front of one of my heros”. But then another voice said, “Or you can overcome this fear and reach a new level of playing….” The latter voice won out, and I’ve been a much better player ever since. And he was the coolest, nicest guy in the world, and I always like when people who inspire me also turn out to be pleasant to be around.

G- Agree 100%, and Victor is a very cool guy to talk to, for sure! I got to hang with him at Blue Note when he was playing with Electric Chick Corea, and was blown away by what a nice guy he was! So, to close us out today, what advice could you give to up and coming bands and musicians out here who are trying to make a career on the road as professional musicians in the music industry?

Gabriel- Oh man, thats hard. It depends on your goals. If you want to be a rock star, it would be a very different answer then for someone who wanted to do like we do. Whatever your goal is, be logical and focused and work hard, and God willing, it will work out.