“Dig That Opener” with The Pimps of Joytime 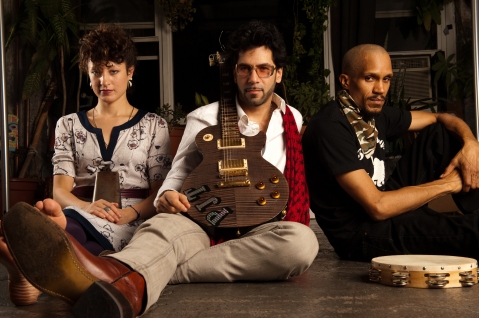 Brooklyn, NY’s The Pimps of Joytime have been making some good strides in the music world over the past few years. Featuring a collection of fine musicians and a healthy dose of musical variety in their sound, the group is determined to bring their infectious beat and melody to crowds looking for a good time. That being said, it was great to check them out when they opened for Lettuce on June 7th in Syracuse, NY.

Though pushed back a half hour or so to get a few more folks in the door, The Pimp of Joytime opened up the show with a solid selection of “Janxta Funk” tunes. I’m not sure what “Janxta” means (and haven’t consulted Wikipedia yet), but I’m fairly certain it means Sly and The Family Stone, Lenny Kravitz, Prince, and Santana coming together for the modern age. Performing for approximately 75 people or so, The Pimps of Joytime offered a flowing, mellow open for the headlining heavyweight.

The 5-piece has a very funky yet loose feel, easy vocal melodies, and plenty of laidback grooves. Their incorporation of Funk, Jam, Blues, Latin, and even Ska flavored jams filled the venue out nicely. Placing a strong emphasis on auxiliary percussion usage throughout their tracks, the added rhythmic components really complemented the group’s sound.

Definitely a band to get to know if you dig groovy tunes, I also enjoyed the tasteful incorporation of electronics and loops in between and during songs. Beginning a song with loop that says “I know you’re gonna dig this” takes guts, and can really back an artist into a corner if they fail to deliver, but no fear here…  The Pimps laid the smack game down tight.

Their ability to display a wide variety of styles makes up for the fact that they are not the showiest of onstage performers, aside from the lead guitarist/singer’s awesome hat… Though they certainly have them, this is not a “chops” driven band. Rather, the group finds their calling in comfortably settling into a solid feel, often times jamming it up during their selections. The group’s stylistic changeup offers the listener a strong variety of song selection, with tracks like “Take These Blues” sounding exactly as the song title implies, as does their genre namesake track, “Janxta Funk.”

The Pimps of Joytime brought very good energy and vibe between band and crowd, and it was a great way to get us ready for Lettuce. I have a feeling the next time they play in our area, we’ll get to see them play to a full house. You can catch The Pimps of Joytime in our area again on July 21st at Neitzsche’sin Buffalo, NY.