The Oxymorrons Interview with D. and K.I. 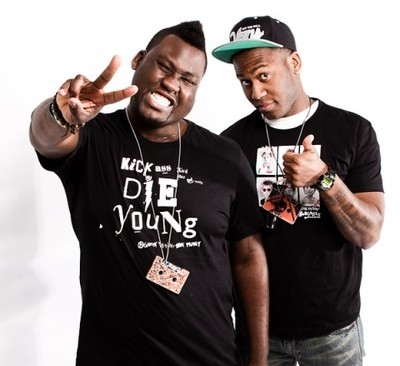 “Trial by Fire” is never the best way to go into an interview with an artist, let alone 2 at the same time and their handlers. But this is exactly what happened to me on 3/1/12, when phone, Skype, and every other form of digital transmission failed at the last minute. AIM to the rescue, and thank you video chat function! Does anyone besides me still use this archaic method of communication?

Anywho, I got to spend a bit of time talking with Hip Hop/Pop act The Oxymorrons. The group will be heading out on the road this month supporting Gym Class Heroes all over the country, and have their eyes set on dominating the scene with their friendly, danceable party jams.

Me – Talk at will and do what you need!

Me- Little bit… I can see you better now.

(K.I. proceeds to show me his teeth) Can you see me now?

Me – (laughing) Yessir! So what’s going on? I’m talking to the 2 members of The Oxymorrons right now, correct?

Me- Excellent! Why don’t you go ahead and give me your names and where you’re from, and you can even give your ages if you want, but I want publish it if you don’t want me to.

Me – And you are The Oxymorrons. So tell me… First of all, how did you come up with the name?

K.I.- So check this out. We were sucking dick and…

The entire room of their office and I bust out with uproarious laughter.

K.I. – Na we came up with the name The Oxymorrons cuz our sound basically comes from different places. And when you see us, you don’t expect to hear what you hear. It’s all about our lifestyle, in a sense. We take from Rock, Hip Hop, RnB and everything.

D- In a nut shell, we blends music together, and what you hear is not genuinely what you see. It’s just kinda oxymoronic.

Me- Gotcha. So how long have you guys been a group? When did you get started  and how did it all come about?

K.I. -Well, we were both doing music separately.

K.I. – And we did music separately for years, with separate groups, toured differently, and after the last situation kinda fell through, we just kinda decided to wing it and try doing it together. That was in 2009. And everything just kinda propelled itself into what’s going on now.

Me- So that’s pretty interesting… The fact that you’re brothers. Obviously, you’re playing the Hip Hop game… You’re not trying to do the whole Hanson pop thing… What is that dynamic like when you’re on the road?

D- It’s funny cuz, though we’ve got the brother thing, this is my best friend. We do everything with each, like with our music. We hang out regularly, play video games, act stupid and joke around, so being on the road together is normal.

Me- That’s very cool. So what shows and showcases have you been on thus far? You’ve only been around since 2009, so that’s really pretty young for a group. What have you managed to do in the 3 years you’ve been a group?

More Laughter… This is a light hearted bunch and very cool to chat with already.

D- We work really hard, we sacrifice, and we do what we need to do.

Me- That’s good! Well, maybe after a little while I can put you in touch with my guy at Highline! Have you guys been overseas at all? Have you been across the pond?

K.I.- No we haven’t been overseas yet but we’re looking into it and trying to get into that realm. Hopefully after we tour with Gym Class (Heroes) next month… I think we leave march 22ND, I hope that opens a lot more doors and puts us on a platform to be able to do that.

Me- That’s awesome! How did that all come about? I only have a few songs that were sent to me and they’re youthful and fun… How did the tour come about?  You’re gonna be thrust into some big audiences, I can tell you that!

K.I.- It won’t be the first time. We’ve done spots with Travie on the “Last Girl On Earth” tour. We’ve done a lot of stuff with him at SXSW. We’ve done tour dates with Lupe (Fiasco)… We’re not new to a big crowd.

D- The more people, the better it is for us, honestly. We get hyped up on stage, and we want to push the energy out to the crowd!

We’ve been pretty close with Travie and Gym class heroes for a while. Travie’s always been around and I’ve been cool with him.

Me- So how long is your run with Gym Class Heroes and where is it going to be taking you guys?

K.I.- Everywhere! All over… we’re doing a lot of colleges. We’re negotiating with Lemoyne College in Syracuse right now for 4/28.

Me- No kidding… That should be around Dolphy Day! What is the deal with albums and singles? Do you have any cuts that are going to be in rotation soon?

K.I.- Yea we’re working on a single now. It’s called “Awesome,” and it’s gonna be the push for the new EP that we’re gonna drop. It’s insane! It’s high enerby, and I’m really excited to release it! It’s one of our strongest pieces of work and I’m real excited about it!

Me- Is this an EP you’re going to be shopping to labels or are you gonna do this diy STYLE, OR what? How’s it going to work?

K.I.- We’re gonna shop it to labels… We’re already in talks with a couple of labels… but we’re just putting it out on our own and feel out what happens. We’ve been indie all along, so why change that route now? It’s not necessary.

D- If we feel like we’re comfortable and we don’t need a major, why go that route? If we feel like a major is a good move for us, and it has to be the right contract, if it’s not a necessity, we’re not gonna jump on it.

K.I.- Yea to sign a contract nowadays, you’d have to be blind.

D- We’ll see what happens from there. Maybe we’ll jump on some more tours But THIS NEXT cd that’s coming out is called “Fun and Games” with DJ Ski, and with that, we’re gonna build up stuff, spend some time in L.A., and see what happens!

K.I.- I’d love to play Warped Tour, we’d like to hit Bamboozle, we’d like to get a lot of notoriety and we’re just gonna use this as a platform to show that we can play these shows, and we can put this show on. Our live show is what’s got us every open door, and it’s always been about our live show. We’re just here to prove it.

Me- That’s awesome! You sound like you have a solid plan and I’m excited to see the show!

So anyways, there’s more music now than ever before, and there’s a lot of kids that still have the dream, you know? You guys are on the upswing right now and you have a really good attitude about the game and how you’re trying to approach the style. As an artist on the rise, what advice could you give to some of the younger kids out there that might need a push in the right direction?

K.I.- Mainly, love what you do! Do it because you love it, and if you truly love it, sacrifice everything for it. What you put in is what you’re gonna get out of it. So it’s like anything else in life… Just go for the gusto and understand it’s not going to be easy.

D- It’s like being a bodybuilder… You gotta go to the gym and yea, it’s gonna be excruciating everyday and you’ve gotta run miles and miles and miles to get to that goal, but that’s what you’ve got to give up for it.

All you need to do is work hard, stay focused, and be very, very good at what you do. And always stay open minded… You can learn from everyone!